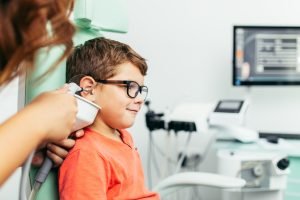 Did you know that blocked ear wax can cause hearing loss?

Left untreated build-up of ear wax can lead to hearing loss, irritation, pain in the ear, dizziness, ringing in the ears and other problems.

Some people are prone to produce a lot of earwax. Still, excess wax doesn’t automatically lead to blockage. In fact, the most common cause of earwax blockage is at-home removal. Using cotton swabs, bobby pins, or other objects in your ear canal can also push wax deeper, creating a blockage. You’re also more likely to have wax build-up if you frequently use earphones. They can inadvertently prevent earwax from coming out of the ear canals and cause blockages. This is a more common cause in today’s environment with more people using earbuds, headphones at work, listening to music and talking on the phone. Hearing can be affected when the wax has built up in the ear canal.

It’s important to note that most people might never need to clean their ears. Ears are designed to clean themselves. while sometimes bothersome, earwax is a natural part of your ear health. You should avoid removing earwax with objects because this can worsen the problem. In severe cases, cotton swabs can even damage the eardrum or ear canal. Medical help is usually only necessary when you have excess earwax that doesn’t come out on its own. If you suspect you have earwax build-up or blockage, see your doctor for assistance or you can try Mirco-suctioning which is a safe and pain-free method to have ear wax professionally removed.

Earwax in children
Children, like adults, naturally produce earwax. While it may be tempting to remove the wax, doing so can damage your child’s ears.

If you suspect your child has earwax buildup or a blockage, it’s best to see a paediatrician. Your child’s doctor may also notice excess wax during regular ear exams and remove it as needed. Also, if you notice your child sticking their finger or other objects in their ear out of irritation, you might want to ask their doctor to check their ears for wax build-up. At Hearing Professionals, at some of our clinics, we can perform micro-suction on children from as young as 7 years of age, if the child can hold their head still. Micro-suction is safe and pain-free, however, children may feel a sense of slight pressure in the ear or airflow which can tend to tickle.

Earwax in older adults
Earwax can also be problematic in older adults. Some adults may let wax build up until it begins to affect hearing. In fact, most cases of conductive hearing loss in older adults can be caused by earwax build-up. This makes sounds seem muffled. The use of a hearing aid can also contribute to a wax blockage.
At hearing Professionals we can look into your ears with a special instrument, called an otoscope, to see if earwax build-up is present. Once this is known we can then perform micro-suctioning or use the curette method to remove ear wax.

Micro-suction Method –
At selected clinics, we use ENT surgical grade microscopes, which can look deep into the ear
canal with magnification. This combined with a specialist medical grade micro-suction machine allows for the safe and painless removal of deep and/or stubborn ear wax. If possible, the ear wax should be softened with a proprietary ear wax softening spray, available from your chemist, at least 2-3 days prior to your appointment.

Curette Method –
This is a dry method that uses a wax loop (or Jobson horn) to remove pieces of wax. The wax loop is circular and has no edges for the safe removal of wax. This is done using a specialised bright light
headlamp (Lumiview or Vorotek) which alters the bifocal vision of the clinician to look deep into the ear canal. This method is most common for hearing aid users.

It’s important to note that hearing loss, dizziness, and earaches also have many other causes. You should see your doctor if any of these symptoms are frequent. A full medical evaluation can help determine whether the problem is due to excessive earwax or another health issue entirely.

Proud to be providing hearing services to the local community for the last 25 years!

There are also many reasons for trusting Hearing Professionals with your hearing health. Unlike most clinics throughout Australia, we are not owned or aligned to a hearing aid manufacturer. Therefore, you can be assured that we will always offer independent advice and discuss the full range of solutions that are best suited to your needs – including hearing aids from ALL leading manufacturers.